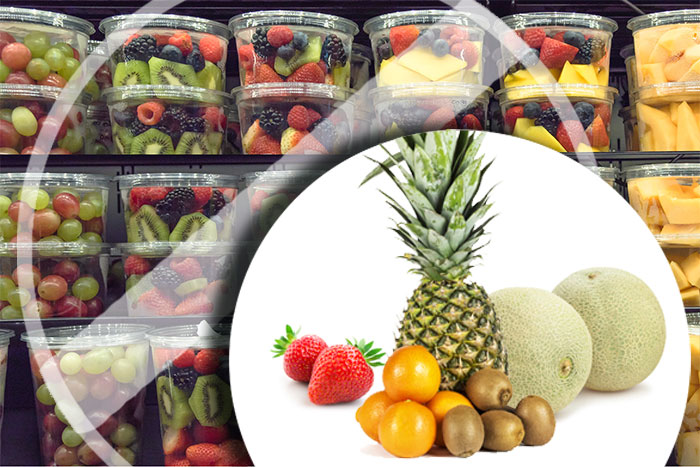 Naturally, foodservice operators are inclined to consider buying packaged precut vegetables and fruit from their vendors because the perception is that it saves labor costs. However, operators who opt for precut are still paying for the labor—just not in their kitchen.

At the same time, while the demand for precut has been on the rise in the last decade, so have reports of foodborne-illness outbreaks that can be traced back to precut, packaged foods.

For some operators—especially those who are comfortable with their vendors’ food safety practices—buying precut is a minimal food safety risk they’re willing to take. But the research behind any business decision regarding precut produce should really go much deeper than cutting corners in labor.

First of all, the food safety issues associated with packaged precut may be bigger than some operators—and consumers, for that matter—realize. Moreover, fresh, prepared-in-the-kitchen produce has a lower-cost, higher-margin potential than assumed.

Mother Nature was on to something when she created the potato peel, the onion skin and the coconut shell. While fresh, uncut produce won’t last forever, it doesn’t take a degree in bioengineering or even a certificate in food safety to know that the shelf life of fresh, uncut produce is exponentially greater than precut “ready-to-eat.”

Forget the lab. Anyone can make that discovery in the home kitchen. Take two fresh-picked cucumbers, and peel one of them. Then leave them both out next to each other on the counter, or even in the refrigerator. Is anyone really going to ponder over which cuke will go bad first?

The fact is, although nature’s packaging may require some degree of cleaning, cutting and peeling in the prep area, it has a beneficial purpose. Ingenious in its simplicity, cabbage grows in the form it does to protect itself. Sure, the outer leaves must be discarded, but they protect the vegetable down to its core . . . until the head is cut, and then the clock starts.

Nature also brings something else to the table—natural flavor. Without exploring the science behind the process of washing precut, it’s safe to say that even to have a chance of achieving food safety standards, processing facilities are using more than just water. One can only imagine that the “prewashed” part of “precut, prewashed produce” devalues that natural flavor.

Then, of course, follows the packaging stage, when the precut fruits and vegetables are typically stored in plastic. Without the protection of its natural packaging, the produce is already more vulnerable to breakdown. Now, inside this environment, where any warmth and present moisture can aid in creating a virtual greenhouse, the threat of spoilage worsens.

Furthermore, some researchers have pointed out that even the most advanced packaging processes offer no guarantee in preventing or retarding bacteria growth. And therein lies the worst case scenario. Beyond the cost of throwing away precut produce that has gone bad on the shelf, a greater food safety risk exists.

Outbreaks in the News

Specific foodborne-illness cases related to packaged precut go on and on.

Some as recent as this past spring, when Salmonella was linked to precut melons—just months after a GlobalNews report explained precisely why precut fruits and veggies are especially at risk.

In 2003, a large, and rather popular, regional restaurant chain in southern California was the culprit in a nasty E. coli outbreak. Investigators there traced it back to bagged lettuce.

A year before that, one of the most legendary produce-borne illness outbreaks occurred at a major theme park in Florida. There, 140 people became sick from prepackaged domestic tomatoes that were contaminated with Salmonella.

Still, other incidents reported Salmonella on lettuce, cantaloupe and sprouts, and other harmful bacteria on everything from parsley and lettuce to spinach, cilantro, watermelon and carrots.

And in a more unusual outbreak during 1996 and 1997, nearly 1,400 reported cases of a diarrheal illness were linked to parasites found on raspberries.

And yet, these periodic negative reports associated with precut, prepackaged produce can be easily overshadowed by the everyday positive advantages of fresh, cut-in-the kitchen produce.

Fresh Is Best for Produce

First of all, with precut, operators are still paying for labor. Off the truck, uncut costs less. Furthermore, uncut not only promotes better food safety, but the longer shelf life reduces the potential for food waste.

Beyond these advantages, the real key to making fresh uncut more cost-competitive with precut is the use of food-prep equipment that is designed to minimize labor and provide more immediate control over food portioning.

Most of these machines available today are designed to fit right on the countertop to save space. A wise choice in the type of equipment can translate into a magnificent return on investment that makes fresh-cut well worth it.

The more advanced designs focus on ergonomics—to reduce operator fatigue for maximum efficiency—and durability—to ensure the unit stands up under the unmatched rigors of a commercial kitchen. They also account for the subtle impact of presentation, incorporating blades that maintain sharpness, guides that promote precision and safety, and other features that, all combined, deliver clean, beautiful consistency.

Furthermore, the best food prep equipment is also very, very simple to use, so an operator can minimize employee training and improve safety for further cost savings—all rather valuable benefits in that commonly “inexperienced kitchen.”

And yet, having said all that, the battle of fresh versus precut even goes beyond cost. On the revenue side, fresh vegetables and fruits, cut in the kitchen just before serving, score much higher on taste with consumers, creating an opportunity for a foodservice operation to boost its food quality image and, justifiably, its menu pricing.

Undeniably, the consumer’s palate can discern between a packaged precut tomato and a fresh tomato. And most will admit it’s a difference worth paying for.

Then, there are the other senses, apart from taste, that weigh in on this issue. Any foodservice operator familiar with the power of merchandising will agree that precut, prepackaged produce cannot hold a candle to freshly prepared fruits and vegetables. In the front of the house or at the point of sale, fresh wins the battle of sights, aromas and, for that matter, sounds, if taking into consideration the appeal of cutting a crisp, fresh onion.

At the end of the day—on the plate or on the books—there simply is no competition between fresh uncut and packaged precut produce. That’s because, long term, the cost savings that come from using the right food prep equipment and the superior food quality that comes from using fresh, cut-in-the-kitchen produce combine to expand margin and increase profitability.

That’s not to mention the argument that fresh-cut reduces costly risk. Referring back to the food safety issue, history proves that fresh uncut helps protect against the potential losses incurred from bad publicity or lawsuits that may come from a foodborne-illness outbreak. While this argument may seem like a reach, tell that to one of the major chains that has been in the news lately because its bagged produce made a whole lot of people very sick.

No matter which way you slice it, making more money in foodservice always comes naturally.

Foodservice Trends & Equipment Strategies in 2020
December 19, 2019 / Industry News
Nemco’s executive team offers its view of what’s in store for operators on the doorstep of the next decade—and how to capitalize.
Read More
the Big-Chill Change in Food Holding
November 21, 2019 / Industry News
3 major market forces have operators getting stone-cold serious about new ways to hold refrigerated foods.
Read More
Plant-Based Profits
June 28, 2019 / Industry News
While one of the biggest menu trends in foodservice continues to grow (literally), here are 6 ways to optimize the opportunity.
Read More
© 2020 Nemco Food Equipment, LTD. All rights reserved.
Privacy Policy | Terms of Use