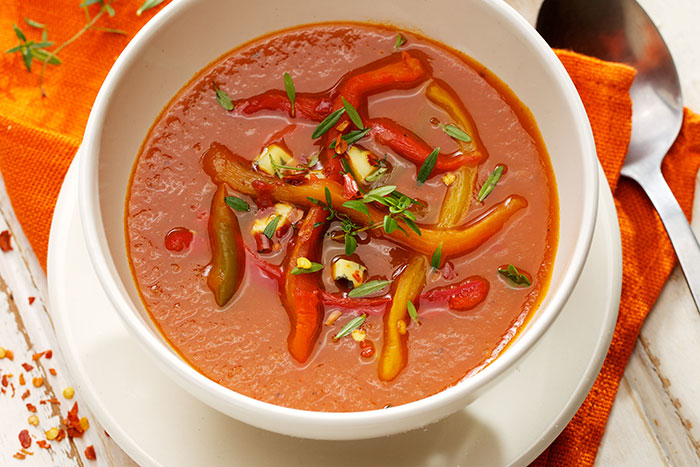 The day-to-day weather may be out of your control, but that doesn’t mean you can’t learn from a little science and some seasonal sales data—and switch up your menu accordingly. Here are three ideas for heating up sales when temperatures drop.

Bad weather can be good news for some businesses. For example, over the colder-than-average winter of 2012–2013, Campbell’s saw a 15% rise in soup sales.

Just like supermarkets can take advantage of shoppers looking to stock up on non-perishables, restaurants have a similar opportunity to capitalize on patrons needing some thermal revival after being out in the cold.

While the top-five most purchased soups won’t surprise you—chicken noodle, tomato, clam chowder, potato and minestrone (in that order)—consumers are still looking for innovations within the category, and even within time-tested favorites.

Spice-level, seasonal garnishes, exotic herbs and spices, organic bone broths, or a self-serve toppings bar that allows diners customizable options, are all trends that have been piquing consumer interest.

Or, if you want to think outside the bowl, the same cold-weather, hot-liquid logic applies to beverages. Coffees, drinkable chocolates, ciders, chai and mulled spice wines are warm beverage options that can be a boon during cold spells.

If you’ve ever seen an Arctic explorer’s diet, then perhaps you’ve heard of pemmican—“a squishy, compressed mush of protein and fat”—that packs enough calories to fuel a body perpetually fighting off the cold.

Granted, your patrons aren’t expending their energy trekking across frozen tundra, but that doesn’t mean the cold weather isn’t having a similar effect on their dining preferences.

Scientists have a number of hypotheses for why winter triggers a hankering for heartier fare. One possibility is that we are trying to heat ourselves from within, as the longer process for digesting protein-rich and fatty foods radiates warmth through our bodies.

Another possibility is that the colder temps and shorter days cause hormonal changes, which increases appetite and specific cravings.

Whatever the reason, human instinct alone says consumers will be seeking out more substantial options—and allowing themselves more “cheat days”—than they would during the summer’s heat.

Red meat, starchy vegetables, pastas, beans, grains and other calorically dense foods, including comfort foods like mac and cheese and mashed potatoes, will have some serious seasonal appeal during winter’s dreariest days.

If you think spicy is a customer turn-off, think again. As recent as 2015, Nation’s Restaurant News reported that a majority of Americans (54%) rated a strong preference for spicy foods. That number jumps to 68% among diners in the 25-to-34 age range.

A younger demographic, including Millennials and Gen Xers, is the main driver behind sriracha’s 72% increase in menu-incidence over the past few years.

Some cuisines, like that of southern India, kick up the “spicy” in their summer recipes in order to induce perspiration, and thus a cooling effect, during the hottest days of the year.

Capsaicin, the active compound responsible for the “heat” of chili peppers, also has its benefits during the coldest days of the year as well. When eaten, capsaicin dilates blood vessels and increases blood circulation (hence, the flush red faces of some diners), helping the body maintain its internal temperature.

From Korean gochujang, Indian ghost peppers and North African harissa to the ever-popular chipotles, habaneros and jalapenos, a myriad of ethnic options from around the world can add some serious heat—and intrigue—to more-familiar menu items.